Recently I read an article that hit me square between the eyes. In the light of this "charged" election - full of emotion and very strong feelings, articles have been published about Obama being a TCK. In conversation with my mom, she mentioned the article and said "You kids are TCKs". Oh my! I belong somewhere - I am a SOMETHING! This explains why I am the way that I am....

I am a TCK - a third culture kid. TCKs are raised in a culture that is not native to their parents. An obvious example are missionary kids whose parents may have been born in white middle class America but moved to a different country to work. Coined back in the 50's by a woman named Ruth Hill Useem, it takes on a whole new light in our current society. Our own President Obama is a TCK.  In his book "Dreams of My Father", released in 1995, he speaks of his Kenyan father married to his white American mother. He spent many years growing up in poverty stricken Indonesia and later in HS lived in Hawaii. He is a man who experienced many different cultures.

Born to white middle class Dutch culture Americans I straddled the fence between that culture and the black first ward ghetto of Paterson, New Jersey. Although I attended a Dutch christian school full of my peers whose upbringing was similar to that of my parents, I was very much part of the urban community. I lived, worked and breathed in the inner city. The kids that I played with were inner city kids. The big difference was that when they were playing on the streets until 11 PM, my mom told me that she loved me too much to let me do that. I had restrictions.

Even though I was a minority in my church community, I never felt that way. (Okay, that's not true, once when some unruly kids from the community broke into the church when I was leading the youth group and was called an "ugly white girl", then I felt the sting). But not in my fellowship. There was love and life and vitality. This was the norm for me. I didn't know another world. These are the people who made me who I am today. These are the people that I often think about and miss because they embraced me as part of their people. It's no wonder that I related so well to Steve Martin in The Jerk when he said "It was never easy for me. I was born a poor black child".  I LOVE that line - because that's who I think I am! I've always been more comfortable in the black culture. I love black gospel music. If I went to an all white church the one black person in the church would be my best friend - not because of their color but because of the commonality of thought. I loved Durham, NC with my multi-racial community and was quite puzzled when I found such a color divide in the year 2006.

For me growing up with people of different cultures made my life rich. I enjoyed southern fried chicken and sweet potato pie. I listened to Stevie Wonder and grooved on Soul Train with the neighbor girls (after I danced to American Bandstand with my other friends). I jumped double dutch (not very well) and stayed current on all the trendy clothing (a product of growing up outside of NYC). I was the kid who's father worked tirelessly in the civil rights era to eradicate racism and embrace everyone of every skin color and culture as brothers and sisters. My mom volunteered years as the secretary of an urban developed christian school started by my folks and many others who wanted to see a school where children learned together from all races. When Whitney Houston died I was glued to her funeral service because THAT was my world... inner city NJ.

To spend time with my very busy dad, I sometimes went on calls with him to deliver food to people in need or just to visit. When I visited my church friends who I believed lived just as I did, I was startled at what they had to live in. I saw into the lives of some living on welfare that just couldn't make it financially.  I was so blessed. I didn't have to call someone to ask for food because my welfare check didn't cover the month's worth of groceries and I didn't live in an overpriced dump with unregulated heat turned up to 105 degrees in total darkness because I couldn't afford the electric bill. I didn't have to stamp out thousands of cockroaches that scurried up walls and across to floors toward my babies. Living in conditions like that will do something to a person. It breeds generations of despair and hopelessness and I understand it. But I saw people who gave praise for their blessings, despite what they didn't have.

I remember coming home during college breaks, from my then very white dutch college. I would be feeling sorry for myself for major traumas like having just broken up with my boyfriend of the week and I would listen to the positive attitudes and praise from folks who had just lost a loved one to the HIV virus or were struggling financially because they lost their grossly underpaying job and yet they would lift their concerns to Heaven and move forward in love and grace.

These were my foundational experiences. I didn't enjoy it at the time because I wanted to be like all my peers in school. I wanted to take nice vacations. My parents didn't earn a large salary. They made tremendous sacrifices which spilled over on the family. I wanted to be able to view the world through one set of glasses but I never could. My eyes had been open to so much in my growing up years and it changed me. 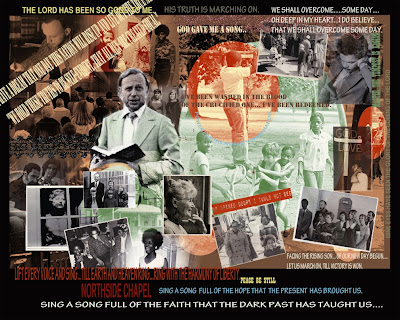 TCK's wonder where they belong. They don't seem to belong fully in one culture or another. They are cross cultured. I live in a white culture right now and I can say that I don't fit in. It's not that I don't belong - if you saw me on the street you would assume I was one of everyone else - but I'm not. In a way I fit, after all, I have lots of extended family all over this town and yet in another way, I feel lost, like I can't relate. It is when I visit NYC that I feel at home, among the diversity and culture.

Last month I was visiting Martha's Vineyard. I was walking down the sidewalk behind three African American women. Every time a fellow African-American would walk by they cordially greeting them, commenting on the cute baby or nice dog or the weather. I said hi to the passers-by too however they didn't greet me. When I entered the public bathroom with the three women they looked past me as if I wasn't there. I have to say that I was quite offended because didn't they know I was one of them? Didn't they know that I was a black kid in white skin? When I told my folks they said, "But you ARE white. Am I? Not really and I'm not black either.

Here's the good news. I can understand many cultures. I'm at peace with different people. Growing up this way makes me a lot more tolerant of others and their opinions and insights. I am extremely open minded and think through complexities and yet on the flip side, I don't see the world as black and white so it makes decision making extremely difficult. I don't have pat answers. I fluctuate. I listen. I learn. I love despite differences.

In this multi-cultured society - more and more people are going to be raised as TCKs. Our world is becoming less homogenous and more diverse. One culture doesn't have the corner on the "right" market. It is as if there are multiple melodies going on in the world. I hear many of them at once and together they sound like a beautiful symphony. Yes there is discord at times but that's because we need to all learn to play together, respecting our differences and the right to play our own tune. Any one song doesn't have more value than the other. We all belong and we all have the right to breath, express ourselves and make our own choices.

I admire my parents so much. They were able to leave their culture and fully embrace a new culture while not losing themselves in the process. They are the same people that they grew up as, and yet so different. They are broad thinkers and loving people and they taught me to be the same by example. I see the same qualities in my children and know that they in their own ways, are making the world a better place too. My husband in a sense is also a TCK. While his parents were both raised in the midwest they spent most of their time ministering to the dutch immigrants in Canada. Most of his family have chosen to stay in Canada and have embraced that culture as their own. This is probably why when I met my husband there was something that resonated with me. He was open minded and in that I felt a connection. My siblings too have paved their way from my brother as an inner-city pastor in Sacramento to my sister that teaches outside of Boston and attends a church squarely in the inner city. She and her husband for years brought their scrumptious gourmet meals to a homeless man who hung out by the church. No meal was too good for Bob. And the beat goes on....

While we were an anomaly in the 60's when we were growing up, we soon will be the majority in the American experience. When the term "melting pot" was coined years ago, I don't believe that they could foresee the future of our country and the world. Yes, we are changing and many people don't like that. I understand. It changes our world, our home as we once knew it. But we can't stop change, we can only learn to embrace our neighbors and find out what great diamonds lie under the differences. It really is worth it in the end! And it's good for the soul too!

If you'd like to read more about TCKs here are a few links.