Grandma's Walks with the Man with Kind Eyes 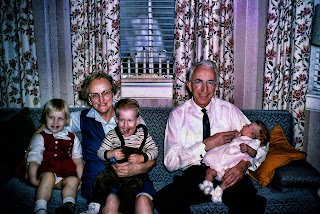 Grace Vander Klay was a lovely creature. I have to think so because she was my grandmother... and a most remarkable woman.

Grandma and I had a very close relationship. She often said "I know it's not right to have favorites, but there's something about that first grandchild." She truly loved ALL her grandchildren.

Perhaps I was so special to her because she "got" me. My folks used to look at me and say "Where did SHE come from?" and then together they would say "Oh yes, Grandma!"

She took an active role in my life, visiting often and then when they were living further away, sending me letters. I went to college one block away from their retirement home. We had many wonderful adult years together full of memories.

I could write a whole blog on stories about the woman my grandma was. The intuitive, resourceful, intelligent, gifted pastors wife who lived through the time of the depression. Today I have just one story on my heart.... it's the day that Grandma saw Jesus.

It was her 89th year of life. Grandpa had passed away a few years earlier. Grandma's eye's were failing her. For years she listened to tapes for the blind but her interest in that had waned as of late. Her joints hurt to the point that she could barely walk. She was showing signs of congestive heart failure and her ears were no longer working too well. In short, her body was deteriorating.

Grandma did not want to make it to her 90th birthday. "I don't want to be here anymore! I don't know why God doesn't just take me home!" she would say with great dissatisfaction in her voice. "I'm no good to anyone here anymore anyway! Don't throw me a party."

We would answer her with the obligatory, "We don't know why, but we sure like having you here yet." kind of responses and assure her that when it was her time to go, she would. And despite her initial protests, she did rather enjoy her 90th birthday party.

On one very special afternoon, a day like any other day, Grandma laid down on her twin bed in her single room in the retirement home to take a nap.

She wasn't asleep very long when a young man looking to be in his thirties, in a white robe and beard stood at the foot of her bed and touched her big toe to wake her. She opened her eyes and looked at him. (Remember, she was blind at the time).

He said to her, "Grace, get up" and stretched out his hand.

She looked at him and in total Grace fashion said "But I don't walk well, my hips hurt". But she obediently got out of bed, with no pain.

Hand in hand he led her out of her room and in just a millisecond of time they were walking along a beach. As they walked Grace kept looking over at this man. He was so kind. His eyes were so loving. His voice was so soothing. They spoke together.

"Who do you think I am", he answered.

"Are you Jesus? Because you have the kindest eyes."

He smiled at her and they continued to walk.

Soon he said "Grace, climb these steps with me."

"But I don't see any steps" said Grace.

"It's okay, they are there. Just follow my lead" said the kind man.

Step by step they went up. Higher and higher they went until they were viewing the earth as if from space.

Grace stared in wonder and amazement. Still in great peace and holding the hand of the kindest man she had ever met.

In the blink of an eye, she was back in her bed...  never to be the same. She had a renewed sense of peace in her place in life.

When Grandma woke up from that experience it was all that she could talk about for days. She wondered what happened. Was that a vivid dream? It felt so real. How come she had no pain? She could hear and see. Was it a vision? What was it?

Was Jesus taking her to heaven and if so, why did he stop? Why was she still here?

Those were questions that I'm sure she has the answers for now. Within six months after that experience, she walked out of this world holding hands with the "man with kind eyes".

That man with kind eyes gathers his loved ones in close. His love is deeper than our deepest pain. My pain and that of others that I know and love is kind of raw right now... but I'm thinking that is going to make this years celebration that much more meaningful for us.

It's Friday and we're feeling a bit jarred, a bit lost, a bit defeated, a bit overwhelmed... but Sunday's Coming!!!